There is a lost myth on every street corner and in every children's nursery rhyme. This blog seeks to explore some of these with you.

Saint Swithun and the pilgrims

St Swithun’s day on the 15th July is a day when we have to seriously keep our fingers crossed for fine weather otherwise the summer will be ruined.

For forty days it will remain,

St Swithun’s day if thou be fair

How did this legend arise and what do we know of the man behind the myth ?

Swithun was born around the year 800, the child of noble Anglo-Saxon parents, he soon gained renown for his piety, prudence and learning. Egbert king of the west-Saxons made him his personal priest and committed to his care the education of his son   the young prince Ethelwolf , future king and father of Alfred the great. Ethelwolf set great store by Swithun’s advice when he became king calling him his master and teacher and proposing  him in his elevation to the Bishopric of Winchester in 852. Although noble and well-connected Swithun , according to Butlers Lives of the Saints, was a man of quiet humility and charity, preferring to walk rather than ride and to eat his meagre repasts with the poor and needy rather than to feast with the elite of the land.

One story of his saintly life ( Legg 2011) illustrates his humility and kindliness, apparently seeing that the poor of Winchester had to paddle through a ford in the River Itchen on foot, as best they could each day, to  sell their wares in the city, he decided to build them a bridge. Thus a substantial stone bridge was constructed near the east gate of the city the site of which features a bridge crossing the river to this day. However the story goes on , as he was crossing this bridge one day he encountered an old peasant woman bemoaning the fact that her eggs had been broken on the way to market due to the rough jostling of some monks. They were the old lady’s only source of income and she was quite overcome by her loss. Swithun went to her and collected up the eggs as best he could ……..miraculously as he handed them to her they were each  fully restored to their smooth  and wholesome glory. This miracle is commemorated on the Thomas Carpenter- Turner shrine  set up by the friends of Winchester Cathedral, which has broken eggshells on each of its four candlesticks. 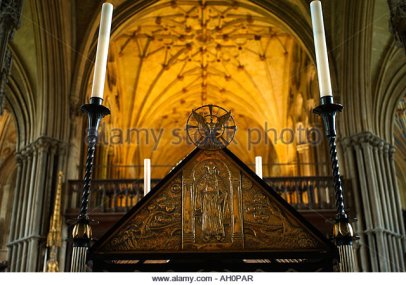 So Swithun definitely was a saintly figure but what of his connection to the weather?  When he died in 862  he was buried in accordance with his dying wishes outside the north wall of the Old Minster in Winchester where he could be among the people and they could access his burial site with ease and the gentle rain could fall upon it.  He rested  at ease here for a hundred years and reportedly many miracles took place as his fame grew and Winchester became a place of popular pilgrimage. But on the 15th July 871  his body was moved from its resting place to a more fitting  shrine inside the Minster.  Lo and behold  the heavens opened and it poured down with rain for forty days bringing the removal of the body to a halt. Back it went into its grave until Edgar the Peaceful , grandson of Alfred the Great, succeeded in the re-enshrinement inside the Minster and this became the point of worship for pilgrims. It is said that over 200 miracles took place within the 10 days after his relocation and that the resident monks became seriously grumpy due to the fact that they had to conduct a thanks giving every time a miracle took place. Legend has it that their grumpiness offended the spirit of Swithun who appeared to them from beyond the grave and gave them a severe telling off ( Boase 1976) !!

Early medieval Winchester was therefore a site of popular pilgrimage, as the  fame of Swithun and his miracles spread far and wide and brought spiritual visitors from many destinations to the city. They would enter the city mainly through the King’s Gate which is still standing today to the south of Winchester Cathedral, the ancient gateway has a small chapel at its centre known as St. Swithun upon Kingsgate which is accessible through a small gate to be found on St. Swithun street, of course. In medieval times it was a common route  for pilgrims to follow the Pilgrim Trail  having  first made worship  to St. Swithun’s shrine in Winchester Cathedral  and thence to Mont St. Michel in Normandy to worship at the shrine of St. Michael . Later however, the fame of Canterbury grew and pilgrims walked instead along the Pilgrim Way which took them from Winchester along a very ancient route , possibly Neolithic,  to the tomb of Thomas a Becket. It is amazing to think that  ancient peoples may have traversed this very route but in the opposite direction from the channel and up to the ancient sacred sites of Avebury and Stonehenge. As the fame of Canterbury grew , Winchester as a pilgrim centre slowly declined and St Swithun sank into obscurity remembered by only a faithful few and when we have a particularly rainy summer!

It is interesting to dwell upon the reasons for a shrine or place of pilgrimage to become enormously popular. Usually is has to do with the association with a holy person and the resulting miracles that have reportedly occurred at their instigation. Pilgrims have in many cases suffered mental or physical ailments that they think the relics of the  holy person will help to ease. This is not peculiar to Christian saints but occurs in many faiths where sacred mystics have alleged healing powers and the faithful want to touch part of the holy person so that the healing power might transfer. Pilgrims do not always journey for self-healing, sometimes they want to express gratitude to God for an act of kindness or for saving them or a member of their family from harm. At other times a pilgrim might travel to a shrine in a state of remorse to say sorry or to do a penance for a terrible wrong they have committed in this case they are asking the holy person to intercede on their behalf with God so that they might be forgiven. Henry II did this in remorse over the murder of Thomas a Becket travelling barefoot to Canterbury in fear for his immortal soul.

Pigrimage doesn’t have to be for a specific purpose, sometimes it is the journey itself that is important. The word pilgrim is derived from the Latin peregrinus , per meaning through and ager meaning field or land, so pilgrimage infers a journey a movement through the land. In fact there doesn’t even have to be a specific destination as the ancient Irish peregrini , early Celtic Christian monks , would climb into their little round boats and set off into the unknown without oars , trusting to the will of God to take them wherever the wind would blow them under the guidance of the Holy Spirit  ( Bucknall 2014). Travelers today follow the road to Compostela in Spain or   the Via Francigena to Rome for many reasons , but in many cases it is the journey itself that is important and not the destination. A chance to reflect apon ones priorities, to find ones own strengths and to just be at one with nature and with the other travelers along the way. For to be a pilgrim is very much about experiencing communitas or fellowship,  to become part of a community and to put earthly pleasures away in the company of others who seek spirituality and guidance. As Chaucer said :-

and bring the droughts of March to end

Why then folks go on pilgrimages

and pilgrims yearn for foreign strands

and distant shrines in foreign lands.

Pilgrims to St. James at Compostella wear a scallop shell and those to Rome wear keys for St. Peter who holds the keys of the kingdom of heaven, what then for St. Swithun?.  His symbols are either a bridge or broken eggshells but not often to be seen adorning a pilgrim’s robes.

So there we have it St. Swithun and the pilgrims and it looks like the weather is going to be good tomorrow on St. Swithun’s day so that will mean a very good summer for us all. I am a great believer in that behind every Old Wives Tale, myth or legend lies a small glimmer of truth so I decided to look at weather facts to discern if this particular story has any factual background. There is indeed the tiniest glimmer of sense to the old rhyme. According to the Royal Meteorological Society , the middle of July tends to be around the time that the jet stream settles into a relatively consistent pattern. If the jet stream lies north of the UK throughout the summer  continued high pressure is able to move in bringing warmth and sunshine. If it sinks down to further south of the UK then Arctic air and the Atlantic weather systems are likely to predominate bringing the colder wetter weather.That makes sense……

May you journey with reflection and joy in the warmth of a St. Swithun summer.